Essays and Orations, Read and Delivered at the Royal College of Physicians to which is Added an Account of the Opening of the Tomb of King Charles 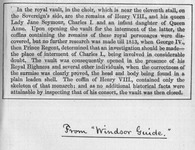 Bolles Notation
In the royal vault, in the choir, which is near the eleventh stall, on the Sovereign's side, are the remains of
Henry VIII.
., and his queen
Lady Jane Seymour
,
Charles I.
and an infant daughter of Queen Anne. Upon opening the vault for the interment of the latter, the coffins containing the remains of these royal personages were discovered, but no further research was made till , when
George IV
., then Prince Regent, determined that an investigation should be made--the place of interment of
Charles I.
, being involved in considerable doubt. The vault was consequently opened in the presence of his Royal Highness and several other individuals, when the correctness of the surmise was clearly proved, the head and body being found in a plain leaden shell. The coffin of
Henry VIII.
., contained only the skeleton of that monarch; and as no additional historical facts were attainable by inspecting that of his consort, the vault was then closed.
From "
Windsor
Guide."

This object is in collection Subject Temporal Permanent URL