The Joyous Neighbourhood of Covent Garden A Literary Souvenir of the Tavistock Hotel, Done in Celebration of its Hundredth Anniversary

WHAT THE CELLARS CONTAIN AT "THE TAVISTOCK. "Old Wines Bottled in the Hotel"
PORTS of 1820, 1834, 1840, 1851, and other famous Vintages.
CLARETS of 1858, 1862, 1864, 1865, 1870, 1874, of the best Shippers.
CHAMPAGNES. All the leading Brands. Old landed.
HOCKS. Old Cabinet.
SHERRIES, - Very Old, in Bottle.
MADEIRAS,
Visitors are, at any time, welcome to view the Cellars. These are very Extensive, and contain a Large and Valuable Stock.
THE SUMMER EXHIBITION OF HIGH-CLASS ENGLISH & CONTINENTAL PICTURES AT ARTHUR TOOTH AND SONS' New Galleries, 5 &6, H A Y M A R K E T (Opposite Her Majesty's Theatre), IS NOW OPEN. ADMISSION-ONE SHILLING, INCLUDING CATALOGUE.

Telephone No. 3753.
SHERSTON & CO., JOB AND POST MASTER TO H.R.H. THE PRINCE OF WALES. FIRST CLASS DRAGS, BRAKES, AND OMNIBUSES. SUPERIOR JOB AND POST HORSES, LANDAUS, BROUGHAMS, VICTORIAS, ETC., SET FOR ANY PERIOD, Chief Office:-40, HAYMARKET. 68, HAYMARKET, 38, WHITCOMB STREET. HORSES TAKEN IN TO STAND AT LIVERY.
JAMES SHOOLBRED & CO., TOTTENHAM COURT ROAD, LONDON, For CARPETS, UPHOLSTERY, CABINET FURNITURE.
H. J. TOWELL, FISHMONGER, POULTERER, AND DEALER IN GAME, 33, STRAND,
Next door to Charing Cross Station. One of the Largest Businesses in London.
Country Orders carefully packed and despatched to any Railway Station on the shortest notice.
HUDSON BROTHERS, PROVISION MERCHANTS, Have served the Tavistock Hotel for many years. Chief Depot:- 52, LUDGATE HILL. I Wholesale Warehouse :- 7 AND 9, ST. BRIDE STREET, E.C. LONDON BRANCHES:- 160, New Bond Street. 444, Strand. Cannon Street, Railway Approach. Islington, 9, High Street. Liverpool Street, 45, 46, and 47. Fenchurch Street, 3, Railway Place. Great Eastern Railway, on the Platform. Gresham Buildings, Blackfriars. Victoria Station, 6, Wilton Road. Dowgate Hill, opposite Walbrook. COUNTRY BRANCHES:- Brighton, 67, East Street. Eastbourne, 62, Terminus Road. Surbiton Hill, The Pavement.
DENT'S WATCHES, CLOCKS, AND CHRONOMETERS, E. DENT & CO., 61, STRAND,
(OPPOSITE BEDFORD STREET, AND CLOSE TO THE TAVISTOCK HOTEL.) City House: 4, ROYAL EXCHANGE, CORNHILL. Factory: 4, HANWAY PLACE, W.
MAKERS to H. M. the Queen, H.R.H. the Prince of Wales, and the principal Foreign and Colonial Governments.
MAKERS of the Great Clock (Big Ben) of the Houses of Parliament.
MAKERS of the Standard Clock of the Royal Observatory, Greenwich.
ALL articles of E. DENT & Co.'s manufacture bear their Trade Mark, as shown above. Without this none are genuine.
New Illustrated Catalogue of Watches and Clocks at reduced prices sent free on application.
E. DENT & Co., 61, Strand, & 4, Royal Exchange, London.
The Estate Offices, No. 28, CADOGAN PLACE, BELGRAVE SQUARE.
Visitors to the metropoolis desirous of securing Furnished or Unfurnished Residences in the best positions in
BELGRAVIA, KENSINGTON, MAYFAIR, ST. JAMES'S, &c., will find their labours very materially lightened by calling at the old-established offices of MESSRS. GODWIN AND BASLEY, the well-known Estate Agents, who have on their books particulars of all the finest Houses in the market.
Their carefully revised and explicit Index to Register of Town Properties is published every Month, and forwarded to applicants free of cost.
Sales by Auction are held at the Mart, Tokenhouse Yard, E. C., twice a month.
GODWIN & BASLEY, Auctioneers, Valuers, Estate Agents, Surveyors, Architects, Assessors, aud Arbitrators, SURVEYORS tO THE HOLLAND ESTATE IN CHELSEA, No. 28, CADOGAN PLACE, S.W.
BANKERS: -THE LONDON AND COUNTY BANKING COMPANY AND THE ALLIANCE BANK.
FELIXSTOWE TIDAL DOCK, WITHIN THE PORT OF HARWICH. VESSELS ARE NOT CHARGED DOCK DUES.
THIS OPEN I)OCK is of the most perfect character, having 23 feet of water at low water ordinary spring tides. A branch railway enables waggons to go alongside the vessels, and communication is established direct from the water side by railway with all parts of Great Britain.
The Company undertakes to Discharge or Load Vessels entering the Dock; also the Warehousing, Storage and Delivery from Warehouse or Quay into Railway Waggons, or Delivery to Quay for Export.
Information as to Dues and Charges may be obtained from J. BUCKNALL COOPER, Secretary and Manager.
Felixstowe, Suffolk.
PIER HOTEL AND RAILWAY STATION ADJOIN THE DOCK.
HOTEL DU NORD, COLOGNE.
Directors - J. FRIEDRICH, ESQ. LEWIS JEFFERIS, ESQ. THOMAS SHARPE, ESQ. CHARLES T. TAYLOR, ESQ.
This Hotel is one of the most important Hotels in Europe, and has been visited by all the Crowned Heads of Europe. The arrangements of the Hotel are perfect. The Rooms are Magnificently Furnished, and the Public Rooms are all that can be de- sired. The Hotel is close to the Railway Station.
ROUGEMONT HOTEL, EXETER. DEVON AND EXETER HOTEL CO:, LIMITED. THE LARGEST AND ONLY MODERN HOTEL IN EXETER. Replete with every Comfort for Families and Gentlemen. MAGNIFICENT BILLIARD SALOON. TABLE D'HOTE, 7 O'CLOCK. NIGHT PORTER ON PATROL. T. W. HUSSEY, Manager.

QUEEN'S HOTEL, CHELTENHAM, It has within the last two years been entirely refurnished and decorated, and is one of the best hotels in the WEST OF ENGLAND. Sheltered by the Cotswold Hills, Cheltenham is at all times a favourite place as a health resort. It is a capital hunting centre, having the Cotswold, Duke of Beaufort's, Lord Fitzhardinge's, and other packs in the vicinity. The country around is charming for riding and driving, with numerous places of interest. The educational colleges are of the highest standard, and there is abundance of good society. TERMS MODERATE.
THE CLIFTONVILLE HOTEL, MARGATE. Situate on the High Cliffs facing and close to the Sea, accommodates more than 200 Visitors. LIBERAL TABLE. HIGH-CLASS CUISINE. Wines of the Finest Quality. ONE OF THE BEST AND MOST POPULAR HOTELS IN ENGLAND, GOOD STABLING. Tariff on Application to LEWIS JEFFERIS, Resident Managing Director. Advertisements. HARROGATE AS A HEALTH RESORT. THE QUEEN HOTEL, HARROGATE.
THE QUEEN, Harrogate, is one of the largest first-class Family Hotels in the North of England, and is as widely famed for its Cuisine as its Convenience. It was established in 1671, and has been recently considerably enlarged.
The accommodation comprises Elegant Public Drawing and Dining Rooms, Reading, Smoking and Billiard Rooms; twenty Private Sitting and Two Hundred Bedrooms, fitted up with good taste.
The Hotel has a South aspect, and stands in its own extensive and beautiful Pleasure Grounds; in which are six Lawn Tennis Courts for the use of the Visitors at the Hotel. The " Queen" being situate in the highest part of Harrogate, facing the Stray, commands a fine view of the surrounding country, and is only a few minutes' walk from the Sulphur, Chalybeate, and Kissengen Springs, Baths, and Public Gardens and Concert Rooms.
The "Old Sulphur" Water is supplied in a room in the Grounds every morning; but Visitors preferring it, are conveyed free of charge to and from the Old Sulphur Well, each morning, in private Carriages.
THE QUEEN HOTEL, HARROGATE. TARIFF. Board and table d'hote gs. 6d. per day. 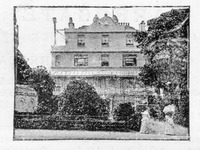 Royal Mounnt Ephraim Hotel, TUNBRIDGE WELLS, KENT. IF there be a place in England which may fairly lay claim to be described as picturesque, surely it is Tunbridge Wells. In itself justifiably renowned for its splendid common, with its noble masses of rock, its numberless walks, and its distant views, the district of which it is the centre is equally famous for natural beauties unusually attractive. There is charming Rusthall Common and its "happy valley," and, close at hand, picturesque Speldhurst; and there is Southborough Common, another lovely spot, the High Rocks, the Promenade called the Pantiles, a quaint and striking relic of a past age, all within a couple of miles. Other attractions, too, abound within easy reach; the historic Pevensey, the very interesting old and perfect specimen of a moated house, near Groombridge; Eridge Castle and Rocks, &c. Tunbridge Wells can be reached from Charing Cross in little more than an hour. At the above Hotel, under the able management of Miss Prouse, will be found excellent accommodation, with extreme cleanliness, and every home comfort.
BATT'S FAMILY HOTEL, 41 AND 42, DOVER STREET, PICCADILLY, LONDON, W. This long-established, First-Class Family Hotel is near the Palaces, Parks, Clubs, and West End Shops. Telegraphic Address:- "BATT'S HOTEL," London. FREDERIC SMITH, DOUGLAS-ISLE OF MAN. CASTLE MONA HOTEL, Situate within its own beautifully wooded and extensive grounds, and overlooking and within 1oo yards of the superb Bay of Douglas. The Hotel was built by the former Duke of Athole as his private Marine residence. There is magnificent Sea Bathing, Boating, and Fishing in the Bay. Omnibus and Servants attend the arrival of the various Steamers from Liverpool, Barrow, Fleetwood, &c. For Tariff, address- The Manager.
The Egyptian Cigarette and French Government Tobaccos Company, Limited. 86-88, LEADENHALL STREET, YENIDJEH AND CAIRO. 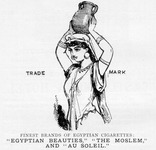 FINEST BRANDS OF EGYPTIAN CIGARETTES: "EGYPTIAN BEAUTIES," "THE MOSLEM," AND "AU SOLEIL." Beware of worthless imitations of the above unrivalled Brands. All Cigarettes bear the Company's Trade Marks and are to be had of all Tobacconists.

SCOTCH WHISKY. "BONNIE DUNDEE." A Special Blend of the finest old Scotch Whiskies, extensively used in England, France, Germany, India, and the Colonies, and in much favour in the West End London Clubs, Hotels, and Private Families, as supplied by GEORGE LLOYD ALISON, 59, HAYMARKET, LONDON, AND 14, PANMURE STREET, DUNDEE. N.B. "The Tavistock Hotel has used this Special Blend of Whisky for now nearly a quarter of a century." Extract of a letter to Mr. C. T. Taylor, Managing-Director of "The Tavistock," dated 21st February, 1887:--"Will you please inform me where you get your Scotch Whisky; it is the best I get anywhere."
MESSRS. BELTON & SONS, HOTEL AND BREWERY VALUERS AND AUCTIONEERS 81, HATTON GARDEN, LONDON. ESTABLISHED BEST PART OF A CENTURY. 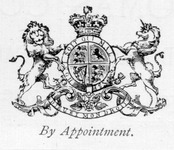 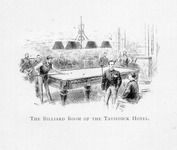 THE BILLIARD ROOM OF THE TAVISTOCK HOTEL.

This object is in collection Subject Temporal Permanent URL Extent